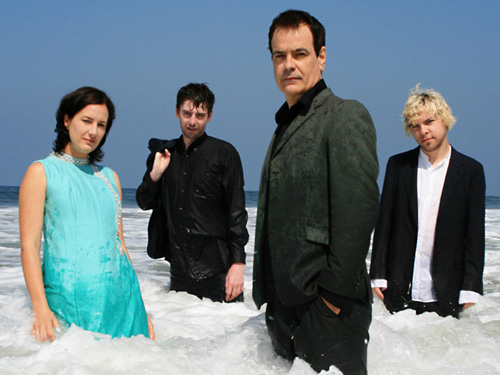 The Wedding Present have at times been accused of nearly slipping into a parody of themselves. Sensitive indie’ites from circa. 1990 will no doubt take great grievance to such a statement and staunchly defend the Presents corner. David Gedge and the ever changing ensemble do have many notable achievements to date after all! They’re the only band to have equalled Elvis in obtaining the most top 30 hits in one year, for example. Critic’s may also want to take into account many notable nods on consistently proving themselves to be musically ahead of ‘NME’d & other such press’ lauded musicians. Include the late John Peel’s worthy stamp of approval… is that Pardon enough?

Over the 23 years since the original formation, 8 studio albums have been released and at least twice as many compilations. Coming out of a so called retirement in 1994, they proved to still have it; albeit with Gedge’s continued propensity to break-up heart ache and romance. They released ‘Take Foundation’, their 7th album in 1995.

Returning in 2008 with ‘El Rey’, which reunited the band with Steve Albini – many deem ‘Seamonsters’, their earlier collaboration, to be the bands best album to date. ‘El Rey’ on the other hand has thus far received mixed reviews, most being critical of the lyrical woe of Gedge’s continued doomed relationships. Yet, it appears that their unswerving thumbs up for live gigs keeps them a premier choice for fans and no doubt, those to become, the stragglers who think they should be there!

David Gedge gives INDIGITS the menu for success on the Q10.

1. How did you get started?
This may sound pretentious but I’ve always kind of known that I’d end up doing this. I think it became something of an obsession for me quite early on… there are pictures of me when I’m very young playing records and pretending to be a DJ… and it seemed like everything else I’ve ever done … school, university, jobs… was just stuff I had to do until I had the opportunity to make music full time.

2. What ingredients do you need to mix together to produce the recipe of your sound?
The ingredients are whoever is in the group at the time. There is obviously some kind of Wedding Present template by now, but the current band-members add their own elements and pull the sound in different directions.

3. Did your first gig make you hungry for more?
I suppose performing is addictive, yes. Perhaps I just crave the attention!

4. What’s the biggest ‘cock up’ to date?
There haven’t been any major mishaps… but being on the road usually involves solving a series of little accidents. We’re currently in the middle of a tour and we’ve already had some food poisoning, a crashed van and a guitarist fracturing his toe… and that was just in the last three days! On other occasions we’ve arrived at the airport and realised that our neatly packed suitcases were sitting in the hallway at home. And we’ve had band members forgetting to disembark ferries… so we’ve sat and watched them from the dockside as they set off sailing back to from where we just came! It’s all part of the experience really, though…

5. What is it that inspires you to make your music/sound?
I don’t know… a fascination with pop culture, perhaps? There is definitely something inside me that drives me to do this.

6. What would be the icing on the cake?
Being asked to play James Bond. I could also do the film score… so they’d get a two for the price of one deal.

7. How will you be remembered? (what will make you vintage?)
I don’t think that’s for me to say, really! Hopefully as a nice bloke?

8. Describe your music as if it were a fine wine.
Definitely full bodied… but also smooth and fruity… with an intriguing after-taste.

9. AfterMint! Does your musical style influence your underwear?
Yes, of course… the making of sexy music requires the wearing of sexy underwear!

10. Digestive! What do you know about Luxembourg?
Well… I know it’s a constitutional monarchy with a grand duke as head of state and a population of about half a million people who speak French, German and that crazy sounding Luxembourgian. Oh, and that The Wedding Present will be rocking the old Grand Duchy on the 30th of November!