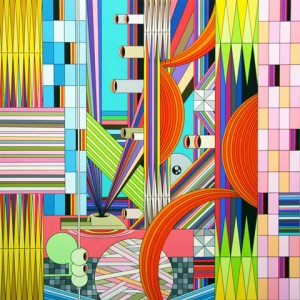 Raised in a military family, self taught painter James Marshall moved frequently throughout his childhood to numerous places along the East Coast (USA), with stints in Hawaii and Japan. He turned to punk rock, skateboarding and graffiti subcultures to find inclusion and identity in his youth. His monocle ‘Dalek’ was a name resulting from an amalgamation of these influences, along with animation and Japanese pop.

Marshall is renowned for his Space Monkey character (pictured below) that he had created early on in his career. Resembling a mouse with mischievous bulging eyes, this creation was once described by art critic Holland Cotter as, “an ingeniously stylized creature with bulbous ears, a lopsided grin and a clear pedigree in the art of Takashi Murakami” (in The New York Times). The figure, practically a trademark, featured in much of his work for over decade, yet it is far less prominent in more recent paintings. It is said the character was used “as a tool to represent and explore concepts of human emotions and relationships, often illustrating themes of violence and survival”.

His formal education took shape in anthropology and sociology, but later he moved to the Art Institute in Chicago, receiving a BFA. It was his work as an assistant to artist Takashi Murakam that was a turning point for his own artistic career. He has since been shown in galleries and museums across North America, Europe and Japan. 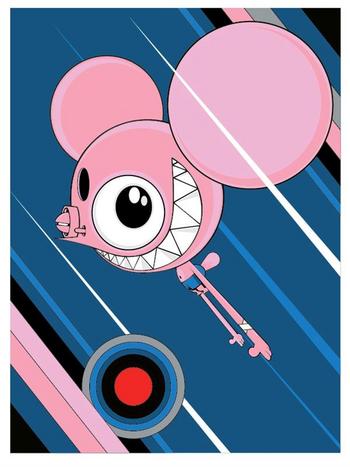 1. What would you say is the most important theme in your work?
I’d say that it’s just exploration. I’m just trying to find ways to execute ideas. My mind runs faster than my skill sets at times and as I figure things out I’m able to push what I’m doing a little more. I’m mostly interested in colour and structure. Creating motion and ideally engaging a connection with people that helps inform the work.

2. What’s most inspiring to your working process?
Not knowing what I’m doing. I’ve always believed that if I knew what I was doing there wouldn’t be any point to doing it. I like the discovery, just figuring things out, having those light-bulb moments of “this might work”!

3. Have you any strange talents that influence the work you produce or the way you produce it?
I don’t know if you’d call them talents or mental disorders!!! The work is influenced by whatever is floating in the air at that moment, it becomes some kind of expression of whatever is kicking around in my head. It’s a lot of frenetic energy tightly controlled.

4. Which artist of the past would you resurrect to collaborate with and why?
I guess it would depend on what I was trying to do in a particular moment. In which case I’d probably resurrect them all and see what happened. Ray Johnson would be a good one – stick him in a room with Hans Bellmer and perhaps Duchamp and Dali. I like that combo – I’d just want to sit back and soak it in. 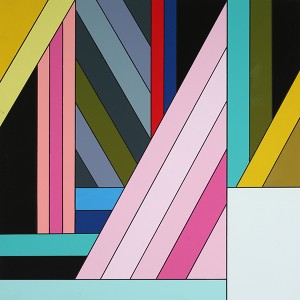 5. Do you think your work is understood or misinterpreted and why?
I don’t know what there is to understand or not. I think most things are misinterpreted, but I think there is a lot of value in that, as it’s part of a dialogue that can lead to discovery. I don’t think I fully understand what I’m doing half the time – like I said, that’s kind of the fun. I think people tend to connect to what they feel is honest and genuine, those things come through or they don’t! That’s the part about being sort of automatic in working, it just is what it is and it’s a product of who I am and what’s going on in my mind. I think some people see it in a similar fashion, some take it to a personal place within themselves or some don’t see it at all. There are no right or wrong responses within art I think.

6. If you could decorate one place in the world what would it be and how would you do it?
Does the whole world count as one place? I’d say that all urban areas should reflect natural areas, to spite man-kinds best attempts to beautify the world with our own creations they all pale in significance to natural beauty. I saw the Eliasson Waterfalls in NY – dude came up way short. I generally really like his work, but he should have gone way bigger and more powerful with those things. I’ve never seen a natural waterfall that was anywhere near that lame. I don’t like that rock hanging over the tunnel in LA either.. but conceptually maybe Andrew Goldsworthy on steroids. As far as how I’d do it… I’d probably hire people that knew what they were doing!!! 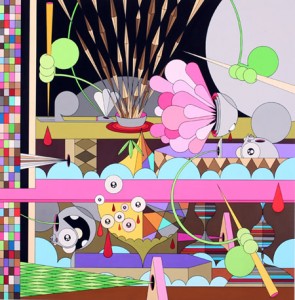 7. What to date has been your ‘cherry on the cake’ moment and what was it that got you there?
No cherries yet! I’m not particularly a fan of cherries… maybe gummy bears. But not on cake, I’ll have to think about what they would taste good on top of. I’ve had a lot of great moments and each thing seems to lead to something else, but I prefer to think all the really good shit is still ahead. I’m still in my infancy over here, with figuring anything out – I should be dialled in by 75 or so!

8. What we ask everyone! Does your artistic style influence your underwear?
I’m not particularly a fan of clothes… especially anything constrictive or binding! I just wear basketball shorts all the time… it’s kind of like under and over wear all at the same time. I would imagine that my choice of dress reflects some sort of sensibilities that are connected to how I approach art as well. Would stand to reason anyhow!
—
More info www.dalekart.com
—