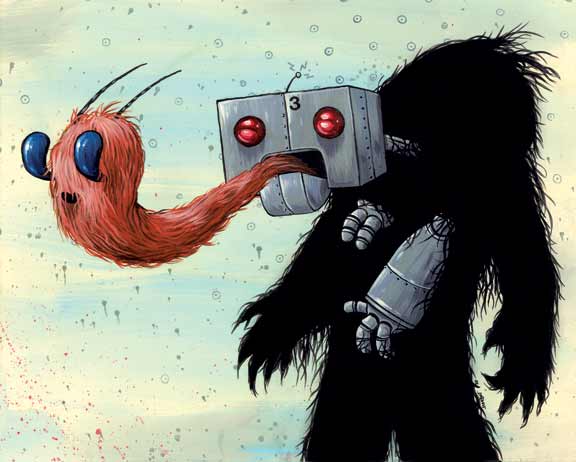 Living in Milwaukee (USA) with his wife, daughter, 2 dogs, and rumours of a captive robot in his basement, James ‘JIMBOT’ Demski has ambitions to build a robot army. A freelance artist who graduated from art school James claims a reprogramming took place after education enabling him to follow his dream and become an artist.

Working with emotions and feelings of happiness, sadness, curiosity, anger, etc. James’ work is about having fun with his imagery. He says he takes influence from his childhood and the fears that followed him as he grew up. Within that assortment are cartoons, comics, fun, insecurities, happiness and anger all which intermingle to make up his work.

1. What would you say is the most important theme in your work?
Well, I have a lot of themes in my work. I think the top of the list is ‘fun and adventure’ though… I like to have fun with my work, and I like other people too as well. However, you’ll also see me dealing with more subtle things…emotions, fears, etc…. whatever I am dealing with at the time. I also like to hide a lot of little meanings into my work, even if it just means something to me. I do all of this with robots, monsters, and the occasional human character that roams in my world. Overall though, I really love to let people decide what it means for them. Sometimes people read things into my work, that was never intended. Sometimes people just feel a real personal connection with my work… often times a connection to a past that was lost to them. I really enjoy hearing what other people think my work means! 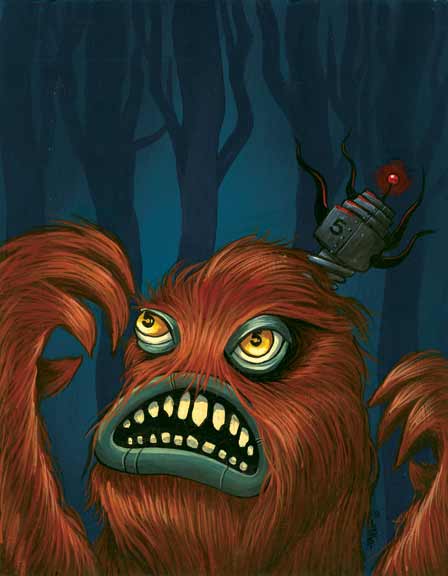 2. What’s most inspiring to your working process?
Audio things… and lots of it. Music, podcasts, audio books, etc. I listen to a lot of things while working, it just helps to move things along, and keep that old brain of mine working. I also do a lot of ‘thinking’ about whatever project I am working on before I even start it. I usually have this whole ‘train of thought’ story going in my head while the idea churns and develops… and that all happens before I even pick up whatever art-making device I am using for the piece! Often times I will change things up or add things right in the middle of a piece too. Until it is finished, it is just an ‘idea in progress’. I also read a lot of comics, watch a lot of cartoons, and look at other art that I love. I try to surround myself with things. There is just so much great inspiring stuff in this world!

3. Have you any strange talents that influence the work you produce or the way you produce it?
Well… I’m not sure if this is strange, but I am pretty much a perfectionist… and maybe a little obsessive compulsive about a lot of things in my life. When I am getting into something, I really wrap myself, and my time, into it…. Haha, just ask my wife! (she will tell you that I work WAY too much). Other than that, I guess I am really patient when I am working on a project… if left to my own devices, I can sit for long periods of time, just working away at something. Actually, now that I think about it, is that really patience, or just the obsessive-compulsive thing showing through? Eh, who cares… I like doing it, so whatever!

4. Which artist of the past would you resurrect to collaborate with and why?
Wow… there are a LOT of great artists. I would probably have to pick Hieronymus Bosch. Both he and Rene Magritte were SO influential to me in my early art years. I discovered them when I REALLY started looking at other artists, and studying them. It would be GREAT to work with them on something. Of course, if they were reanimated, and they were zombies, I’d have to take them out!

I do want to pick a LIVING artist too though… Stan Lee! That guy is AMAZING! He is getting up there in years now, but that man’s comics (and iconic characters) pushed me in the direction I eventually went. Easily just as influential (If not more so) to me as Hieronymus Bosch, AND with less dead-ness.

5. Do you think your work is understood or misinterpreted and why?
Understood? No. Misinterpreted? No. Very few people REALLY understand what I am trying to get out in my work (or more appropriate, HIDE, in my work). A lot of it is me just getting my own ‘things’ out anyway, so that doesn’t really surprise me. Honestly, I think my wife is the only one that gets it consistently, but then again, we were meant for each other, so that makes sense… she understands me. Still, I don’t think my work is misinterpreted either. Like I said before, I LOVE hearing what other people make of my work. However my work touches them personally is how I want people to interpret it. This is not to say that I am always hiding things in my work either, sometimes I just like painting a bad-ass robot or something. I guess that adds to the fun of it though, and just keeps people thinking.

6. If you could decorate one place in the world what would it be and how would you do it?
Really I would LOVE to build and decorate my own house! To say that I made it myself, from the ground up, would be AMAZING. Besides, it would be fantastic to be able to have a house was unique and fun for my daughter to grow up in. Just think of all the secret passages and hidden rooms I could incorporate into this! All of the art, antiques, toys, and miscellaneous ‘stuff’ I could put on the walls. Of course a tent in the living room made out of blankets and chairs, and decorated with stuffed animals would be pretty rad too… 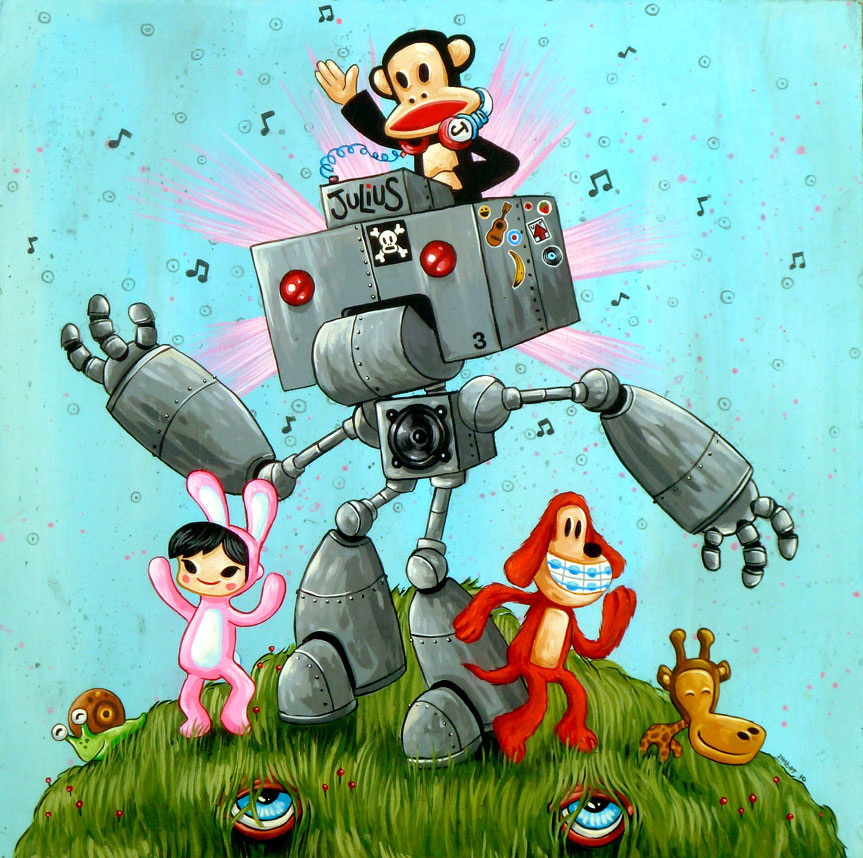 7. What to date has been your ‘cherry on the cake’ moment and what was it that got you there?
Well, there have been a few great moments in recent Jimbot history. Most of it involves meeting people that I’ve ‘always wanted to meet’, and just doing what I love to do…. My art. Most recently though, the ‘cherry on the cake’ moment was probably when I won the Paul Frank “Art Attack” contest this past September, and landed my artwork on the back of the October 2010 issue of Juxtapoz magazine. First of all, Paul Frank has been an inspiration to me for SO long so it was an honor that way, but then, I got on the back cover of Juxtapoz, which was a magazine that basically introduced me to all kinds of awesome artists (especially back in it’s early days). Honestly though, I just love to do what I am doing… and I don’t ever want to stop. Knowing that art is something I can do for the rest of my life is probably the biggest cherry!

8. What we ask everyone! Does your artistic style influence your underwear?
Honestly no… um, well maybe yes… I dunno. Pretty much, I like cotton boxers, and sometimes I like to paint in my undies… comfy!

Doodle space, if you feel so inclined! 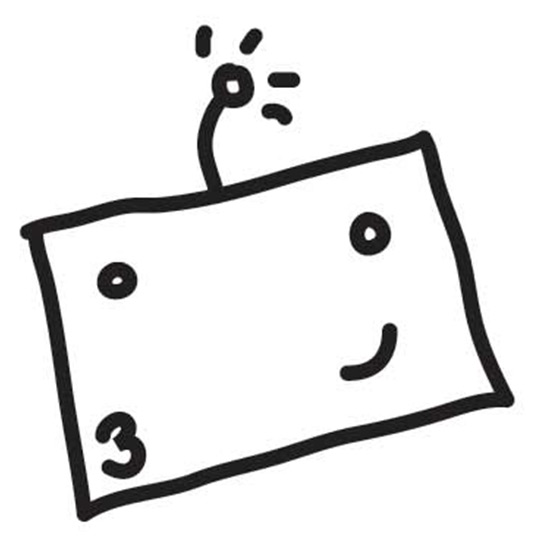