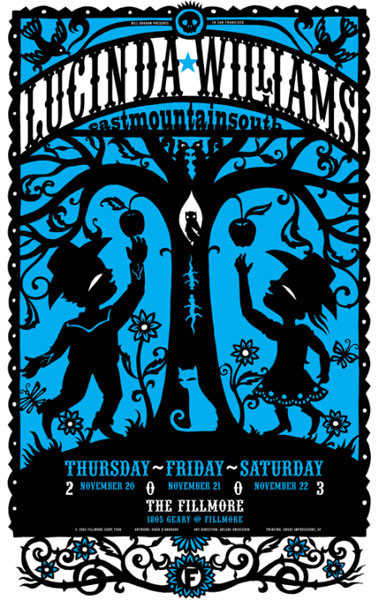 Hugh D’Andrade is famously indiscriminate about the uses of his art. It has appeared on book covers, magazine spreads, rock posters, Burning Man paraphernalia, board games, as well as the occasional t-shirt and skateboard. He says his greatest ambition in life is to project his mental images into the minds of innocent people everywhere.

Alongside his illustrative work Hugh has been a “radical activist” throughout his adult life. He was part of the group behind the bicycle movement known as ‘Critical Mass‘. He also worked with the Electronic Frontier Foundation as a designer/activist making graphics and bloggin about the rise of the Surveillance state.

1. What would you say is the most important theme in your work?
Do I have a theme? I try to make sure my art is fun, playful, and a little disturbing. I’d like people to come away from my art tickled in a place that’s a little uncomfortable.

Now that I think about it, there are some threads (not sure I would dignify them with the word ‘theme’) in my work that are consistent. Many are about kids facing down a scary world. I try to ensure that the kids in my work are never frightened or belittled. I’d like them to feel ’empowered’, if I can use an annoying buzzword.

And there are images of strong, powerful women that crop up repeatedly. I guess I like strong powerful women. (Married one!) www.matirose.com

2. What’s most inspiring to your working process?
I like to think about a project in the back of my mind for a long time, just letting ideas percolate in the background while I listen to music, doodle or ride my bike. And then I do all the usual things. I sketch, get frustrated, check my email, come back to the sketch, look at work by artists I admire. I also find that I work well with a podcast or talk radio show in the background — my favorite is This American Life. 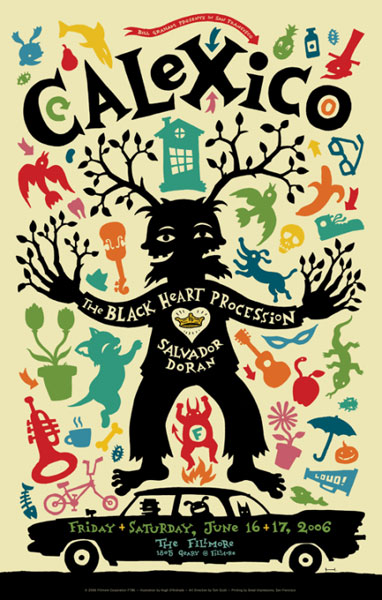 3. Have you any strange talents that influence the work you produce or the way you produce it?
Strange talents? I don’t know if this is strange or not, but I find I make up stories to go with my drawings all the time. Each image has a back story. I love to write, and one of the projects I keep meaning to make time for is to put this storytelling habit of mine to work by writing more kids’ books. (I have one that I’m shopping around to publishers now.)

4. Which artist of the past would you resurrect to collaborate with and why?
That’s easy: Toulouse Lautrec! He was a brilliant artist, troublemaker, rebel, party hound, ladies man despite a disfiguring disability, both a fine artist and a commercial artist — and he has his own syndrome named after him, Toulouse Lautrec Syndrome! Truly a modern hero.

5. Do you think your work is understood or misinterpreted and why?
It used to be that people said my work was dark, and that I must be working out my aggressions or something. I used to feel that was not accurate. It’s not therapy, it’s just art. You make images that you want to see. Nowadays, my art isn’t so angry, so I don’t hear that so much. But mostly I find people kind of ‘get’ my art right away on an intuitive level, probably because I keep things simple. This ain’t rocket science!

6. If you could decorate one place in the world what would it be and how would you do it?
I think the Bay Bridge should be painted a nice green — avocado? lime? — so that it won’t always be seen as the poor sibling to the beautiful red Golden Gate Bridge. (It’s currently a boring and non-descript silver.) 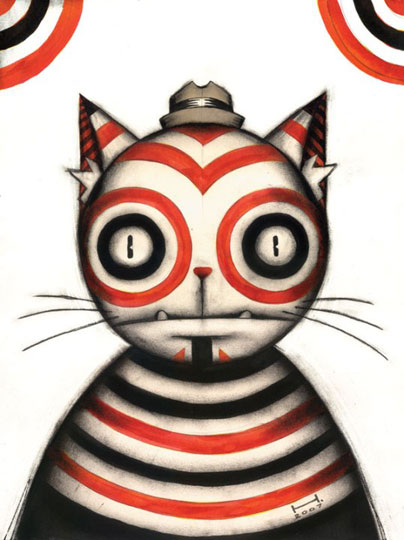 7. What to date has been your ‘cherry on the cake’ moment and what was it that got you there?
It was really nice when I got a piece on the cover of the Communication Arts Illustration Annual (pictured left), the yearly juried competition which features the best work in the world of illustration, a big industry touchstone. I had actually gotten rejected so many times that I had stopped submitting my work, but in 2007 I decided to give it another try, and was really psyched when they chose my piece for the cover. The odd thing was that they chose a personal work that was completely unlike most of my other work, so I guess I didn’t get as much work from that exposure as I might have. Oh well! That’s life on the merry-go-round.

Another good moment was when I got an assignment to do a series of 6 young adult covers just a week after quitting my part time job. I’m not a big believer in that theory that ‘the universe’ awards you for doing certain things, but in this case that seemed an unavoidable conclusion.

8. What we ask everyone! Does your artistic style influence your underwear?
I heard an interview with Russell Brand where he said he dresses kinky on the outside because he usually feels kinky on the inside. I generally don’t, so my underwear is not particularly interesting.