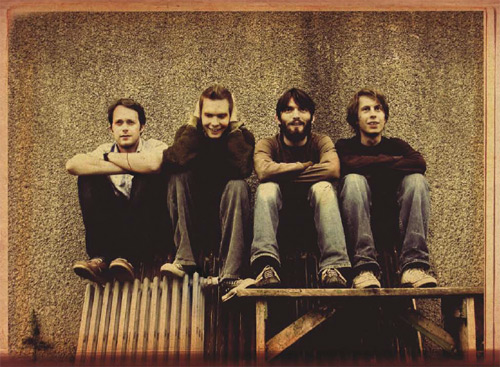 Where I come from, Iceland is a place where mothers shop for frozen foods, ice cream and economy boxes of Mr Kipling cakes. Years of yawning through geography classes taught me that Iceland was also a place often described as the most lunar experience on earth.

In musical terms, Iceland is probably still best known for its 1980s export, the Sugarcubes, featuring pop oddity Bjork. In recent years, Sigur Rós (pronounced See’er Rose) have been adding their name to the list of famous Icelandic exports with their freaky trip rock featuring songs with lyrics comprised of a language they made up themselves. While this might not leap out as a PR and marketing man’s dream job, add in the fact that the songs seldom fall short of the 6 or 7 minute mark, making any radio plugging tasks nothing short of a nightmare.

Nightmare is a word I stumbled upon more than a few times while doing my research before we met Sigur Rós. They are notoriously monosyllabic and extremely introverted in their approach to selling themselves. Interviews often degenerate into yes/no sessions. As I pondered what to ask, it dawned on me that with my reasonably strong west coast Scottish accent where people often misunderstand me was I really the best person to interview Sigur Rós? Probably not, but interesting, well, hopefully it would be….

From the bare-footed stage performances to the fact the ‘Jonsi’ (singer/guitarist) plays the guitar using a violin bow, nothing seemed remotely standard about Sigur Rós. The violin bow had me thinking of Led Zeppelin but there is no standard guitar rock to be found. The eccentric singing style and tripped out whale like sounds had me thinking Radiohead but it’s typically slightly less intense and, as Liam Gallagher one described Thom Yorke as a “googly eyed little fucker”, with Sigur Rós, thankfully there are no “googly eyes” on display.

As you can imagine, the amount of contradiction with an act this untypical is quite impressive, relentless in their refusal to change or play the corporate rock game, they are actually signed to a major label. Even more impressive is the dismissiveness about their collective output. “Our songs are about nothing,” they proclaim. The complete lack of desire to succeed has seen them cut their touring from the long gruelling schedules normally associated with bands at this level down to 3 and 6 week stints. Commercial success, or fringe amounts of it, found its way to Sigur Rós with their most accessible album to date, Takk. While many bigger names in music are waxing lyrical about the genius in their soundscapes – supposedly Chris Martin of Coldplay had their records playing in the background while wife Gwyneth Paltrow gave birth – the commercial radio station still seemed nothing short of sceptical.

After many years of making music, there was perhaps a definite intention to make the 2005 ‘Takk’ album more accessible if not commercial, Sigur Rós disagreed choosing to employ the ‘natural progression’ argument. They later followed up with the 2008 ‘Með suð í eyrum við spilum endalaust’ which was well received. Currently we eagerly await the release, reportedly sometime next year, of their latest effort which they announced at the end of May had finished recording.

We met up with Sigur Rós to discuss life on the road, life off the road, imploding band stories, flirtations with fame and a desire to be awkward in the face of stardom. Here is what they had to say…

Eddie Leonard: Seeing as you’re far better known now than when you started out, is there more pressure to make an album a specific way. Is there a difference in being popular from trying to become popular?
Sigur Rós: No not really. Who do you mean from?

Is there more from yourselves, pressure in the group?
No, no, not really

What about pressure from major labels. You do have a major label deal in the USA?
No, no, we wouldn’t have signed for this label if that were the case. EMI knew what they were going into with us, so it’s just the same.

In previous years you seemed to have spent a long time touring compared to now, although you say it’s because of people having families. Is there also an element of not being too close together for too long to minimise tension in the band?
All about the families, yes. We try to keep it as short as we can, but still economically ok.

Yeah, short touring becomes more costly, how do you balance this?
We just try to make it all work out?

So you have a large merchandising stall, then?
Ha ha, yes yes, we try…

Does the shorter touring help keep you settled into life in Iceland? It must be very different from the quiet life when you’re on the road?
Yeah, eh, on the road there is the lifestyle, we just try to get into it, other times we just relax and don’t do anything, you know?

How do you combat the radio play problem? Would you do shorter songs?
Now is the first time we’re getting radio play actually, mainly in the UK, but not too much. Yeah we have problems but you can’t think about that too much….

Is it deliberately anti-commercial?
No no we just do the music like it is. Be adventurous.

So have you ever tried to make a 3-minute pop song?
No no we don’t really try to do anything. We just see what happens.

Do you still say that your songs “are about nothing”?
I like the idea that people connect to the music and think about things but no, the songs are not about this; we all have our own ideas.

What about people’s perceptions of the songs? Do you ever laugh at what some people think the songs are about?
No ‘cus they are about nothing, so it is only people’s ideas.

Do you ever write negative or angry songs then?
No, no we just always see what happens. I think when we write music we have to get into a certain state of mind you know? It’s very hard to pinpoint an exact emotion, it’s always open.

You are quite famous for one-word answers, so if you could choose one word what would it be after a bad interview?
Probably ‘tired’ you know?

What about after a good show, how would you sum that up in one word?
Oh, energetic probably, ‘good’.

What about people leaving your show early, what word would you have for them?
I don’t know, eh…

Do you wonder what they think?
I don’t really see anything. I’m concentrating.

Since this interview Sigur Rós have taken an indefinite hiatus and Jónsi has been touring on the back of a solo album. He also stated they would reband for a further album expected to be early 2011.
—
More info www.sigur-ros.co.uk | www.myspace.com/sigurros
—

This interview was first published in UPFRONT Magazine © Eddie [INDIGITS] – All copyright remains with the author. Please do not reproduce without express permission from them