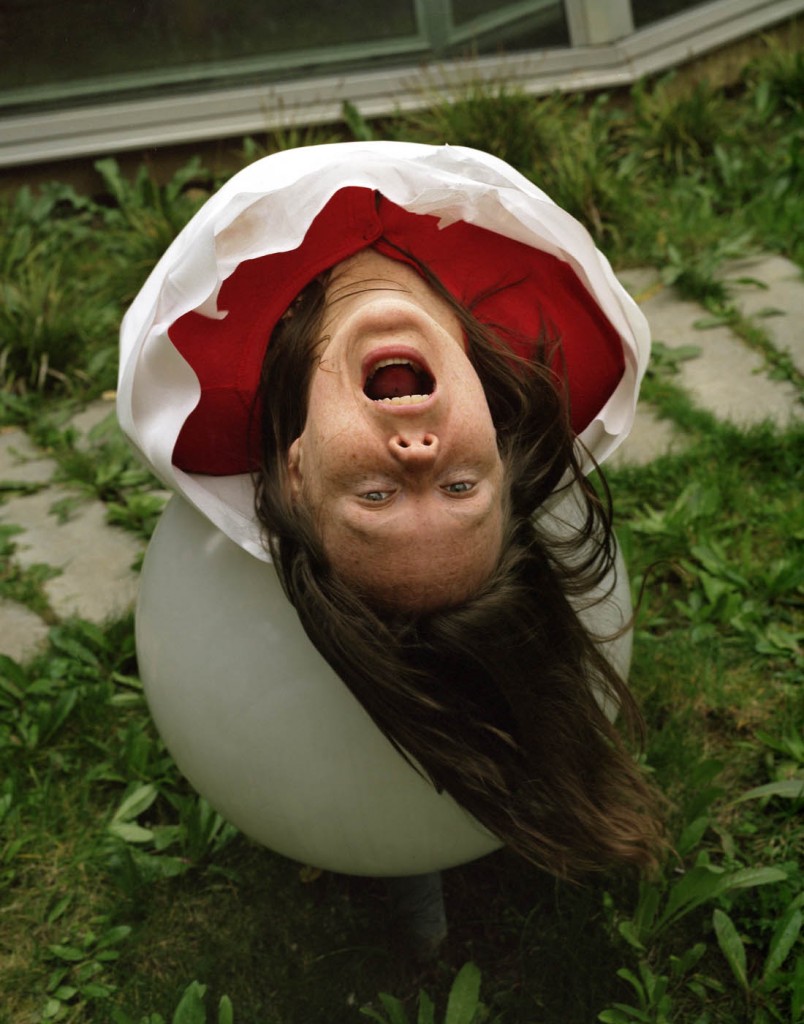 Kevin Blechdom is from Florida and equipped with a laptop, self-made computer music programs, piano chops and a 5-string banjo she “sings from the heart”. Trained as a classical pianist and composer Kevin (originally named Kristin Erickson) always sought out new musical structures and patterns. Starting her recording career, in experimental rock band ‘Adult Rodeo’ alongside her brother and sister-in-law, she released two albums. Later she hooked up with Blevin Blectum (Bevin Kelley) after a chance collaboration one Halloween night and formed ‘Blectum from Blechdom’. The duo released many records including ‘The Messy Jesse Fiesta’ which won 2nd prize in the prestigious Ars Electronica for Digital Music [2001]. But, not long after the pair split only to reunite again in 2006 and have since been recording and touring together.

Initially after ‘Blectum From Blechdom’ broke up, Kristin continued to use her team name Kevin Blechdom and relocated to Berlin for a 5 year period. Here she wrote and produced two albums, under Chicks on Speed label, ‘Bitches Without Britches’ [2003] and ‘Eat My Heart Out’ [2005]. Providing a mishmash of styles and production techniques Kevin brought Broadway though to general MIDI rock opera, electro-smudge and aleatoric blatherings to present her own bizarre spin on pop music.

2008, Kevin completed her M.F.A. degree in Electronic and Computer Music Composition at Mills College in California. Her final project was a forty minute opera called ‘Recantata’ portraying the tale of preschool teachers wrongfully imprisoned for satanic ritual abuse under the misguidance of child psychologists. She also spent time touring as a duo with her hi-tech country and ragtime band ‘Barnwave’ alongside Christopher Fleeger.

1. How did you get started?
I’ve always loved music. I played and wrote music with my brother growing up, and we were in a band called ‘Adult Rodeo’ on Shimmy Disc in 1998.

I studied composition at Mills College. Then I played computer music with ‘Blectum From Blechdom’ – and when we went on hiatus in 2002, I went solo as Kevin Blechdom.

2. What ingredients do you need to mix together to produce the recipe of your sound?
Music, music, music and ideas that tickle me – a disregard for genre and tradition, while being firmly grounded in genre(s) and traditions – but mostly by following my interest. I like to make the music that fascinates me.

3. Did your first gig make you hungry for more?
Playing live music makes me extremely happy. I’m not sure I remember my first gig. I’ve played piano concerts since I was a child. I remember being very shy when I started singing, and that has been a more gradual development.

5. What is it that inspires you to make your music/sound?
Love, Sound, Ideas – and mostly people. Energy from people, talking to people, brainstorming ideas with people. I love to collaborate, and I also love writing love songs.

6. What would be the icing on the cake?
Being able to make a living from music and creative activity. This would make me a happy human. To have enough of a career to survive as an artist.

7. How will you be remembered? (what will make you vintage?)
I don’t know. I am hoping to write more musical theater pieces. This is what I love most, theatrical music – on stage and film.

8. Describe your music as if it were a fine wine.
I have been told it’s not for everyone – I think it varies a lot from track to track, year to year – yet maintains its own identity as it’s most often melodically driven. It bridges electronic / acoustic / rhythmic / melodic / low-fi / hi-fi / serious / silly – it’s kind of all over the place yet somehow sticks to itself.

9. AfterMint! Does your musical style influence your underwear?
A bit – now I wear square dance ruffled bloomers on stage.

10. Digestive! What do you know about Luxembourg?
I played in Luxembourg maybe 4 or 5 years ago – i had a wonderful time, and the day after the gig, ended up at a birthday party – and it was a really relaxing nice day.