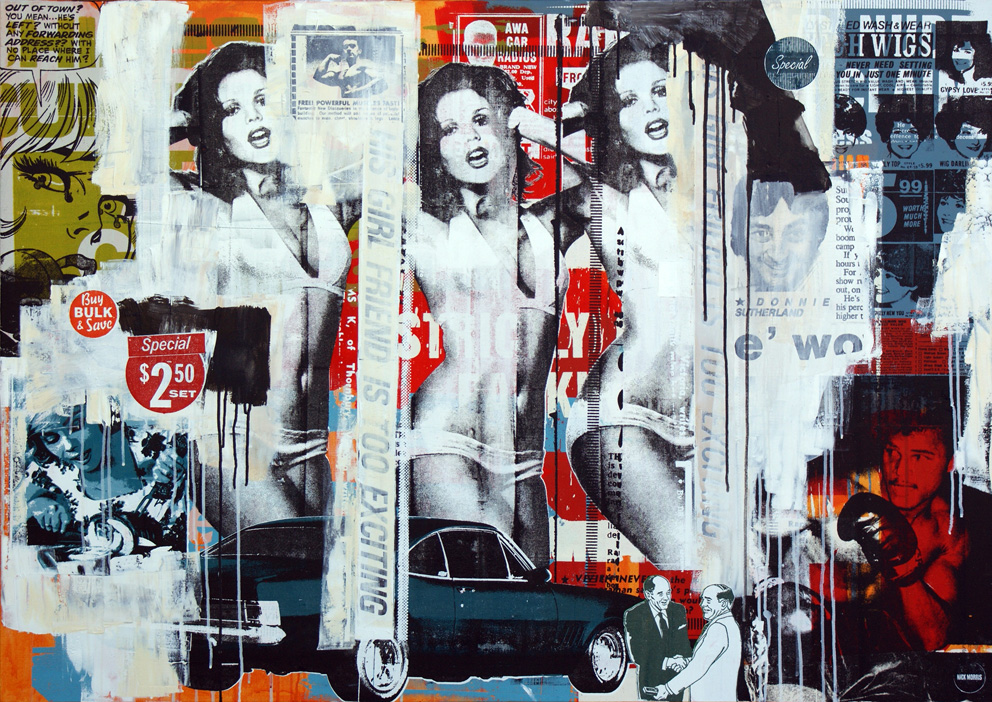 Australian Nick Morris decided early on for a career in art – at around the age of 6 to be exact. Somewhat deterred by the possibility of not making it into the 2% of artists who make a living off ‘it’, he opted for a career in Graphic Design.

He started out at Chisholm Institute in Caufield. Here he met fellow designer Dave Bowers with whom he set up a clothing label ‘Umgawa’. A successful initial run ended with their inexperience catching up with them. Next up was a dream-fulfilling stint as Art Director at Quicksilver, Toquay. Followed on a few years later by the set up of ‘Anyhow’, a freelance graphics company serving the streetwear industry. The business peaked around 2004 when we were invited to speak at Semi Permanent graphics conference in Sydney and then later at Agideas with a host of international designers.

Also around this time, so some 20 years later from starting out as a graphic designer – a small exhibition in Torquay and some insistence from friends initiated the change in direction to what would become work as a full-time artist. Bowing to his friends bidding he created for the exhibition a series of paintings. He utilised some screen printing techniques he acquired during his years as a graphic designer and a dash of Andy Warhol inspiration. The process reignited a passion for art.

It took several more years of hobby-esque painting time before he took further steps to establish himself as a full fledged working artist. In the beginning he reduced work to 3 days a week and concentrated on painting the rest of the time. But after a few sold-out shows Nick fulfilled his ambition and entered the domain of the exclusive 2%!

1. What would you say is the most important theme in your work?
My art is the Australia that I grew up in and live in and that is the theme thats most important in my work.

It’s all the images that are indelibly stamped in my mind. I feel fortunate to have been born in this country and my art is testament to that and all the other great international influences that we are exposed to. The unique culture of Australian muscle cars and the bogan culture that so often revolves around it. The beautiful form of the female even when it is thrown into that bogan culture, is still the same beautiful form that adornes the highest of levels of society. Our obsession with celebrities, their personal lives and the bizarre headlines designed to capture our attention in the media. Throw in the word nude, sex or confessions and it is sure to create excitement with a story that rarely lives up to the hype of the headline. Advertising seems to follow suit and the more conscious we become of ads of the past, they seem to be so naïve and ridiculous. It’s entertaining to think that our ego’s bought those campaigns hook, line and sinker. 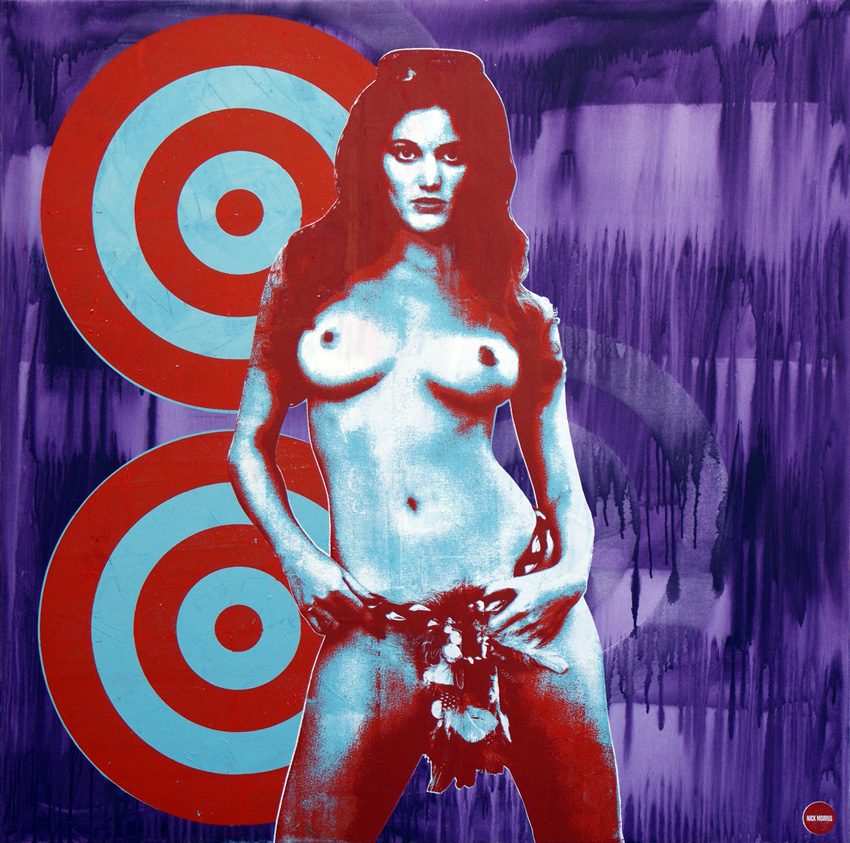 I choose not be cynical but focus on what’s great about our unique culture and it is truly unique. It’s a culture that doesn’t need to take itself too seriously and can willingly take the piss out of itself. At times it can be silly, even ludicrous, but it is what we have grown up with and been exposed to over the journey so it seems all so normal.

3. Have you any strange talents that influence the work you produce or the way you produce it?
I’m am not sure that I have a strange talent but I love screen printing and have ever since I was a kid and that has definitely influenced my work. Having spent 20 years as a graphic designer has allowed me to utilize the skills I picked up along the way to create screens and separations along with a fair apprenticeship in design, colour and balance of each piece.

4. Which artist of the past would you resurrect to collaborate with and why?
I would love to work with Raushenberg or Warhol. I love what they achieved along with their work. I would love to spend time with them so that there success and creativity could rub off on me.

5. Do you think your work is understood or misinterpreted and why?
I think with my work that what you see is what you get, so there is little room for it to be misinterpreted.

6. If you could decorate one place in the world what would it be and how would you do it?
I would love to decorate the Sydney Harbour bridge. Some sort of giant paste up would be ace. 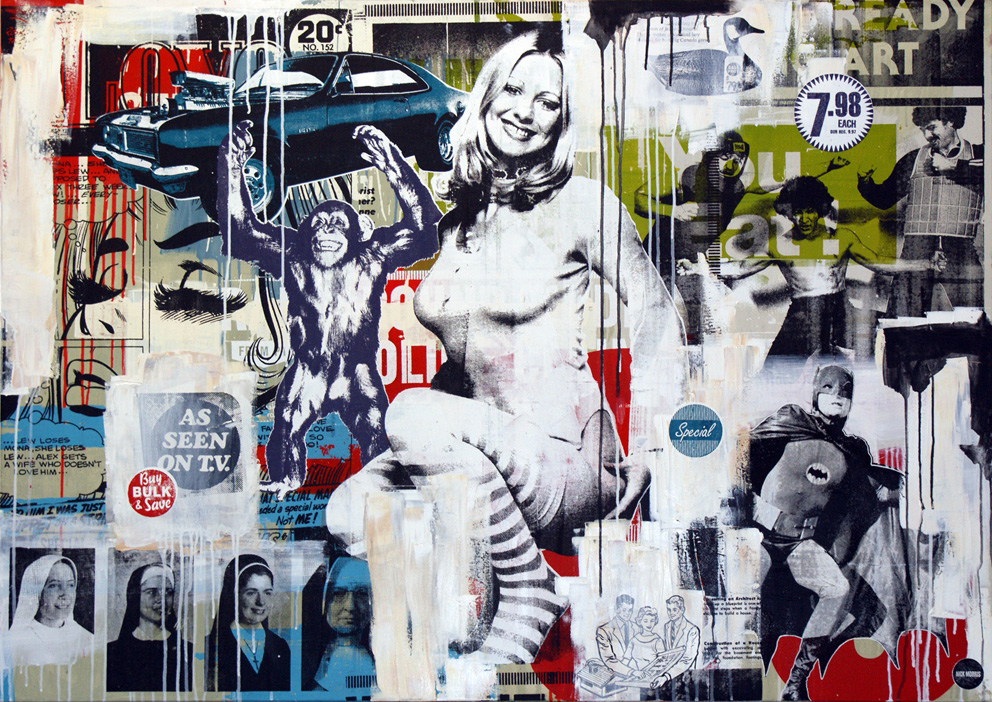 7. What to date has been your ‘cherry on the cake’ moment and what was it that got you there?
Being shortlisted for the Doug Moran prize was probably the Cherry on the cake to date along with every time I have a sellout show. Waking up every day and painting also rates right up there. That is heaven on earth.

8. What we ask everyone! Does your artistic style influence your underwear?
My artistic style has stuff all to do with my underwear at this point in time. Perhaps one day I will have my own range of underwear!!