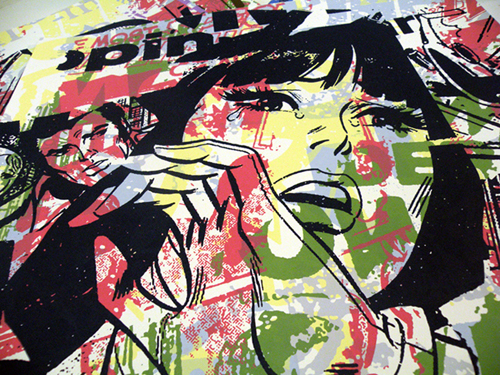 Greg Gossel was born in 1982 in western Wisconsin, he currently resides in Minneapolis. He studied Graphic Design at the University of Wisconsin-Eau Claire and has since exhibited in; Los Angeles, San Francisco, New York, Copenhagen, Milan and London. In 2009 he was invited to create a large scale mural on the façade of Miami’s Aqua Art Fair.

Greg’s work is seen as an expressive interplay of words, images and gesture. He utilises an assortment of mediums including silkscreen, experimental Xerox copy and transfers, as well as various found billboard scraps and signage. He also has worked commercially citing some of his clients: Burton Snowboards, Stussy, GNU Snowboards and Interscope Records.

1. What would you say is the most important theme in your work?
I guess it kind of depends on the particular piece, but in general my work deals with themes such as consumerism, equality, race, class and media manipulation.

2. What’s most inspiring to your working process?
I take a lot of inspiration from the process itself. I work in a variety of mediums, so a lot of times the mistakes that come from trying new things can inspire the work. For example, I’ve been in my current studio for a few years now and do much of my large scale screenprinting work on the floor, so over time all the layers of overprints, spilled ink, etc. have built up and the floor itself has become really interesting to me. So at times I try to incorporate the feel of something like that into my work. 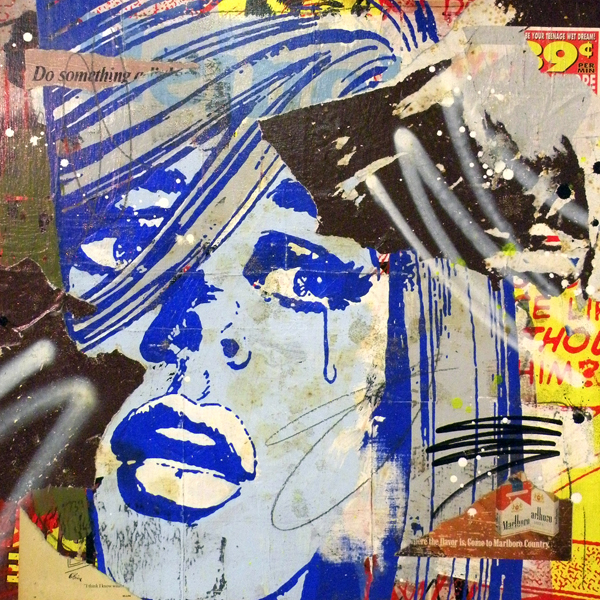 3. Have you any strange talents that influence the work you produce or the way you produce it?
Not really… My work tends to be pretty physically demanding in that I’m usually doing a lot of screenprinting on a fairly large scale which requires a good amount of space and physical work to create the pieces. I tend to be drawn to that type of work as opposed to sitting at an easel, but not really sure any strange talents of my own brought that about.

4. Which artist of the past would you resurrect to collaborate with and why?
Probably Rauschenberg, he’s the artist that I was inspired by back in school to start experimenting with mixed-mediums, collage, etc. So he would seem like the obvious choice for me off the top of my head…

5. Do you think your work is understood or misinterpreted and why?
I don’t really start a particular piece with a set expectation of how it should be interpreted, each piece is just more so part of the over-arching whole that makes up my body of work. And I think that is open to one’s own personal interpretation, so yes and no I suppose.

6. If you could decorate one place in the world what would it be and how would you do it?
Ah that’s tough, not sure if I have any specific places I’d like to decorate… In general I’d like to create more large scale immersive outdoor works.

7. What to date has been your ‘cherry on the cake’ moment and what was it that got you there?
At this point I think I’m most proud of the mural I created on the facade of the Aqua Art Fair in Miami in 2009. My brother helped me out much of the week installing the piece, we had a great time working together and it was really rewarding to see it all come together.

8. What we ask everyone! Does your artistic style influence your underwear?
Haha… Ah, I don’t believe so…